Sharing stuff is coming back. The main reason for that might be the economic crisis, but also the knowledge of so much stuff on our planet might raise awareness. After I finished my studies I lived on a kibbutz in Israel for 6 months. Besides the fact that it was a life-changing experience in itself, I also experienced the sharing of stuff. The system of kibbutz-life in a nutshell:  community life, every person gets the same no matter the skills or responsibility of the job he or she does, all decisions are made by all, facilities are for everybody. All work which is necessary, like laundry, kitchen, education, building, agriculture, childcare, maintenance, management etc is done by a member of the community. It's faded, this kind of life. Through the years people wanted more if they had more responsibility, they wanted money to go out into the 'real world', they wanted more privacy and really live with their kids. Understandable. Salaries, possession and privacy are the norm now. So now it's mainly living within the community and sharing stuff that still exists.  Cars, tools, landscape, schools, medical service, leisure equipment, laundry service et cetera. That's great, and very 21st century. 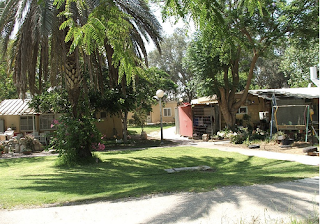 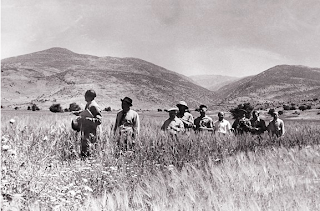 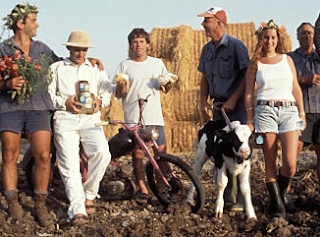 images from the kibbutz website
I read about a man here in The Netherlands, Martin Hietkamp, who told the newspaper Trouw:" I live in a neighbourhood in which every household has a garden. On summer evenings from every shed a lawn mower was taken to mow the tiny pitch of grass. It made me think why don't we share those tools?". Clever thinking, it's indeed ridiculous. So he set up a website for that. And there are many more. The amount of stuff we all own and hardly use is amazing. So these initiatives are very important. First to reduce the amount of stuff, and also to enhance the sense of community.
The story of stuff is a great website, it shows some interesting processes.
Also spullendelen.nl / hurenvandeburen.nl / peerby.com
It's going on all over the world, and worth diving into! 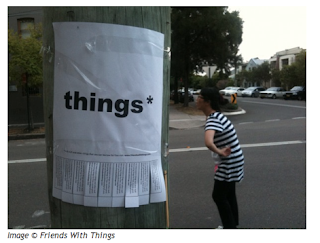 Well, some big news fro Malawi this weekend which might be good for all women in the country: After President Mutharika passed away he is followed by Joyce Banda, former women's rights campaigner.
Here's an article from the Guardian:

Prominent women's rights campaigner Joyce Banda was sworn in as Malawi's president on Saturday, becoming southern Africa's first female head of state and raising hopes for a fresh start in the small, poor nation after the death of her predecessor. Banda, a 61-year-old policeman's daughter who has won international recognition for championing the education of underprivileged girls, had served as vice president under Bingu wa Mutharika, who died on Thursday following a heart attack. She succeeds him under the terms of the constitution.
Aid-dependent Malawi had slid into economic crisis over the last year, as Mutharika, a professorial but temperamental former World Bank economist, squabbled with major western donors who then froze millions of dollars of assistance. Banda took the oath of office on Saturday in the National Assembly in the capital, Lilongwe, as flags flew at half mast in mourning for Mutharika, whose death was only officially announced by Malawi's government on Saturday.
"I want all of us to move into the future with hope and a spirit of unity," Banda said amid loud applause and singing.
The two-day delay in the official announcement of Mutharika's death had raised worries that there could be a power struggle. Banda had been expelled from his ruling Democratic Progressive Party (DPP) party in 2010 after an argument about the succession, though she retained her state position. But fears of a political crisis in the landlocked former British colony receded as top officials and the army backed the handover of the presidency to Banda. In a sign that she has support across the political spectrum, opposition leaders had called for her to be sworn in as head of state swiftly, and 20 members of the national governing council of Mutharika's DPP also expressed their backing for her. Banda said she had already held a "good meeting" with Mutharika's cabinet. Malawians, many of whom had viewed Mutharika as a stubborn autocrat, appeared to welcome their first female president.
"We now have a female president, this to me is the greatest day because she is a mother and a mother always takes care of her children," said Alice Pemba, a vendor in Lilongwe.
"She will be able to do a good job and surmount the challenges to work with the IMF and World Bank and win back the donor support which we need," said a local businessman who gave his name only as Tiyazi. Earlier, Banda appeared at a news conference to dispel fears of a succession struggle and declare 10 days of official mourning for Mutharika, who had ruled since 2004. "I call upon all Malawians to remain calm and to keep the peace during this time of bereavement," Banda said, flanked by members of the cabinet, the attorney general and the heads of the army and the police. "As you can see, the constitution prevails," she said. Malawi's constitution says the vice-president takes over if the president dies, but Mutharika appeared to have been grooming his brother Peter, the foreign minister, as his de facto successor. Peter Mutharika did not attend Banda's swearing-in. 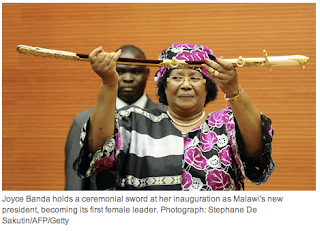 Good to read that fair trade is increasing. Half of the Dutch population does buy fair trade products occasionally and sales have risen with 14% in fair food. Also design is an upcoming segment in fair trade. Products made with a small footprint; recycled, organic or re-used and good circumstances for workers. The shop I blogged before, Fair+Fair is doing well. A very contemporary look and feel in the shop, appealing products that matter in a wide variety. Also Waar is a good example; they sell lifestyle - and household items as well as food. You have to innovate, also in this market segment; it's getting bigger but if shops don't modernise their identity and their collection they miss the development.
The mission should be that in the years to come fair trade will become the norm, and all other production methods will reduce almost to zero due to higher prices. Prices of those products should become much higher because of higher taxes ( for non-worker-friendly production, foot print, water print etc).
Sustainability and fair trade should become more and more connected. In the long term that's better for us as well as the planet and therefore is cheaper.
As many world-wide conferences about the future of our planet are due to start this spring; it's also becoming more and more clear that the real development has to come from the bottom: consumers. We have the power in our wallets. Even if they're not always filled to the brim, we still can make choices. 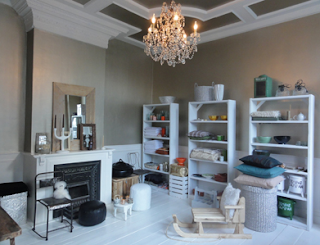 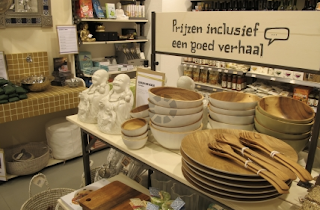 Hebridean Life Now and Then 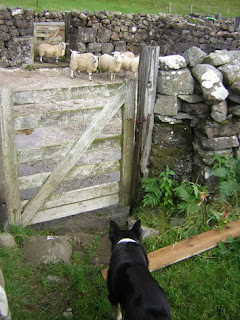 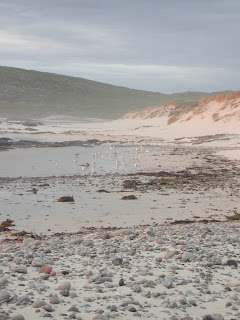 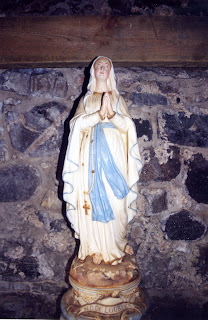 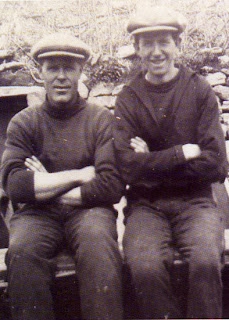 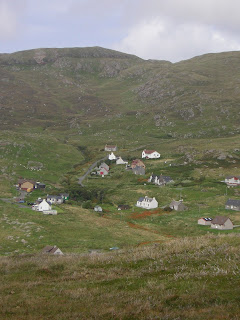 Make Do and Mend

In the research for my new collection I came across some great books about 'make do and mend'. How to darn, how to keep moths from your wardrobe, how to increase the size of a garment; in the Second World War years in Britain, many leaflets were made to help families cope with the crisis and still dress decently.
It's very inspiring, and fun; if you look at it. And also very sustainable: repairing something rather than throwing it away and buy something new. In those days they had no choice; we have. 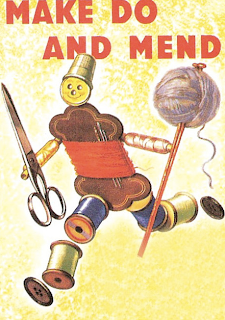 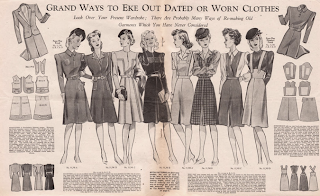 And this is also St Kilda; the crafting of fabric. Wool was carded, spinned, coloured with plant dyes, woven, waulked (shrinking) and sent to the mainland where it was used for making garments. A community task, for men would round up the sheep and shear them,


In June the St Kildans used to round up the sheep on each of the islands for wool gathering. All the dogs and most of the islanders used to take part in this exercise, which was known as the
'Ruagadh' and involved chasing the sheep round and round the island until they were trapped.
Charles Maclean 1972

Women would spin and colour the wool,
In the summer Peigi would have washed and dyed the fleeces. Then she would card the wool, combing, cleaning and making it so ready for spinning in winter.
Peigi was constantly singing while she spun.
Margaret Fay Shaw 1955
Men would weave, women would waulk. Waulking was done while singing together; it was a tradition done with joy and laughter.


The women kneaded and pushed the wet cloth round and round the table with song after song till it was shrunk enough and the feel of the texture right.

Those were the days when a wearer could regard a Hebridean fabric with the thought of the songs and
gaiety that went in the making of it.
Margaret Fay Shaw 1955

All this can only be done while in full balance with nature, the raw material and the community. Sustainability at its best. 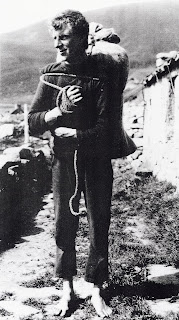 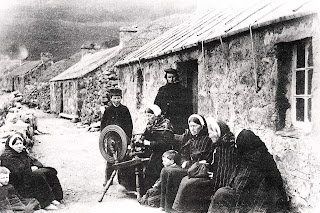 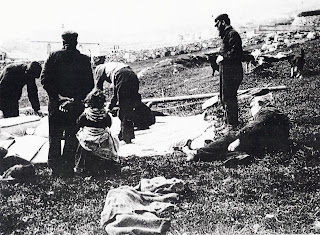 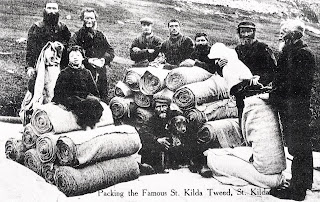 When I first had allowance in the archives of the National Trust for Scotland while researching for my collection, the photo librarian showed me the images of St Kilda. St Kilda is a phenomenon, for the story of the island is documented very well. So remote, so harsh, such a close-knitted community and such a heartbreaking end. All inhabitants had to be relocated to the mainland in the 1930-s for island life had become too dangerous. Suddenly diseases and hunger had become a problem; after centuries of wellbeing. The local culture on the island had always been flourishing, and crafts such as knitting played a big role. Seeing these photo's, made by the first tourists arriving on the island, one realises how very special the atmosphere must have been. Though knitting and other hand crafts were a normal daily task, the task was a very social one. It was completely intertwined with all other community activities. What they made were necessary items such as socks, scarfs, gansey's and blankets. Since seeing these they have always been a source of inspiration for me. For research as well as designs. 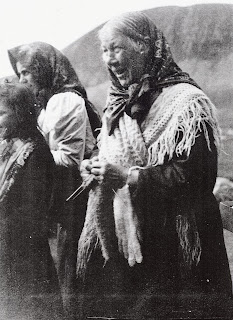 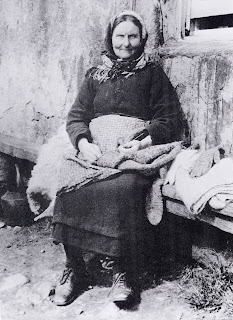 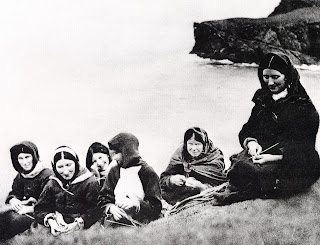 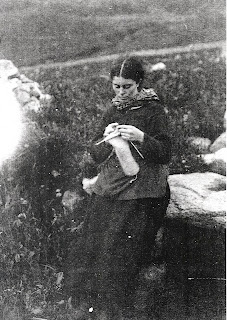