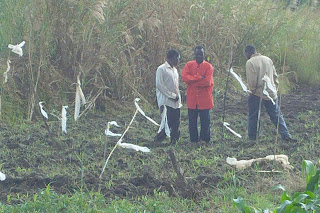 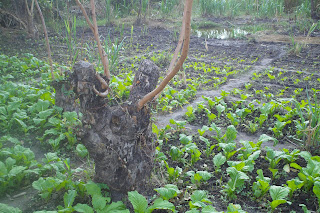 The last two weeks I've been in Malawi. With Dick Wittenberg. And Chifumbi, our most needed and wonderful translator. Without him we would have had no ears, no mouth. We've been working on a development project on agriculture for small farmers in 6 villages in the rural area west of the capital Lilongwe. People who belong to the 'bottom billion' as economist Paul Collier calls this group. Less than a dollar a day. 80% of the population in Malawi is farmer. People in this area mainly grow maize, tobacco, vegetables such as tomatoes, onions, mustard, pumpkin, chinese cabbage and sugarcane. This project aims to assist them with knowledge and skills about irrigation, provide treadle pumps and input such as fertilizer and seeds. Isaac Kazinga, a young ambitious dedicated local specialist, is the project manager. The main objective is to provide food security and make them independent. This is about to be the last year of our 5-years project, initiated by 'The Friends of Dickson'. So we have also looked back. We've monitored the development of the project, discussed what needs to be done in the near future and talked to many people. We've seen progress, we've heared harvests have increased, we've felt optimism. We've also seen problems such as neglect, misuse and greed which need to be solved. By the people of the villages themselves. But mainly we've seen increased strength. The project has become local ownership, which is the only way to improve. Development 3.0!
I feel very privileged to have stayed again with the people in the village of Dickson. Lived as they do, in their rhythm, with their habits, rituals and friendship. 'Umodzi' is one of the most wonderful words in Chichewa, the main language in Malawi, I've learned. It means 'we're together, we're one'. That's a base most needed for anyone, anywhere in the world. I feel 'umodzi' with the people I know in this area, they must feel 'umodzi' among each other as well. For everybody must have the chance for improvement in their lives.
This story will be continued.